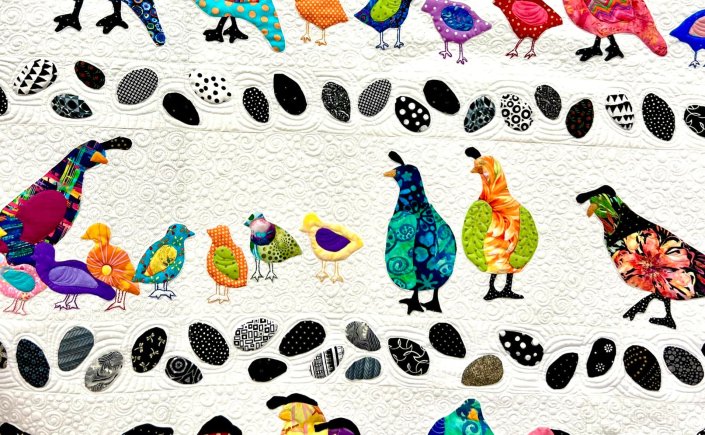 A couple of days ago Elizabeth and I went to Del Norte for lunch and to see the San Luis Valley Quilt Guild Charity Show. It had been Elizabeth’s birthday the day before and I worked out a way to treat her to the show. She’s pretty fierce about paying her own way, but she and her husband do so many things for me that I can never repay — liking hanging a door on my studio. Besides, she’s awesome.

We had lunch which was great as was the conversation. Then she wanted to cross the street and go to Kathy’s Fabric Trunk to see if they had white crochet thread. I’ve been in this store frequently with her. There’s nothing in there for me to buy, but the owner is a lovely, sweet person and there are dogs. Last time I was there was during Covid and I just went to the front door and knocked. Kathy brought out some seam tape I was picking up for Elizabeth. It was — as were most stores that year — a ghost store.

Tuesday was a different scene completely, leading to a beautiful human scenario.

The store had more stock than I’ve ever seen — quilting season (winter) is approaching — but even then there was MORE. In the “back” (not really, it’s another full sized room beside the main store) were tables around which sat maybe six women. OK, I’m going to say they were all larger women, most in dresses?! It doesn’t matter but I’m painting a scene here. Elizabeth was looking at a crochet thread. There was no white, only ecru which led to a big deliberation about that. Her goal was crocheting angel tree toppers for the upcoming craft boutique. She stood there with the thread deliberating and talking with the women who were all involved in sewing projects.

At the end of the table in a very helpful wheelchair sat Kathy’s very disabled daughter and, beside her on the floor, was the black lab who never leaves her side.

To my right, in another space, marked off by shelves, a woman measured fabric. As the parrot and I chatted, a yellow lab came to check on the ladies to see if they were dropping any of their lunch and get pets from me. I was mesmerized by this sight. All the women were so happily engaged with each other and their project. They were interested in Elizabeth’s project and her deliberation. It was so beautiful, enchanting. I wanted to pull out my phone and take a photo, but I thought it might be rude.

I learned later that Kathy now holds classes — conducted by experts in particular sewing and quilting techniques — at her store. I’m sure one of the reasons those women were so buoyantly happy (besides being together) is that they were learning something. From there we went to the Rio Grande County Museum.

As we walked to the museum door, I saw that Elizabeth had her money ready. Lyndsie, the director, waved away the money, “You two are good. You don’t have to pay.” I’d arranged to take income from notecards to pay our donation, but it ended up that Lyndsie paid for us. She gave me the $10 someone paid for a pack of notecards. ❤️ A few minutes later, I gave the $10 “back” by buying a Christmas present that benefited the Quilt Guild. High finance among little ladies…

The quilt show was great, and we got to vote for “best quilt” in a few categories which we like doing. Then, draped over an old sofa (I mean OLD), we saw an amazing quilt, an antique “fancy” quilt a crazy quilt of luxurious fabrics. The legend going with it explained that the quilt maker had been born in 1815. Elizabeth and I kind of agreed that we’d lost something over the years.

Good news from the museum? Looks like the Holiday Art Show will happen. They were finalizing the document — contract — artists will have to sign releasing the museum for liability. Dates are already being considered. I was happy to hear that and grateful to Lyndsie for advocating for me (us).

I don’t know where I fit in this amazing valley. I think, like a lot of things in life — singing in public for example — my primary role is that of “appreciator.” I wouldn’t be the first “alien” to commit to a life here, as this immigrant’s trunk from Sweden reminded me.

UPDATE: I just got home from the doc. I’m not an expert but I saw my X-rays and everything looks good. The doc explained that joint inflammation seems to be a fairly common post-Covid problem. It’s possible that someone will read my X-rays differently, but I sincerely doubt it. I was so relieved when I saw them, I almost cried and the radiologist hugged me. I needed that hug.

Uh…good thoughts appreciated — I’m off to the doc for hip X-rays. I don’t want to endure surgery again. The extreme inconvenience, pain and complications of it? Just not in the mood. No, it’s nothing like being a refugee from the Russian army or the innumerable worse things that can happen to us humans, but it’s still not fun.

This site uses Akismet to reduce spam. Learn how your comment data is processed.