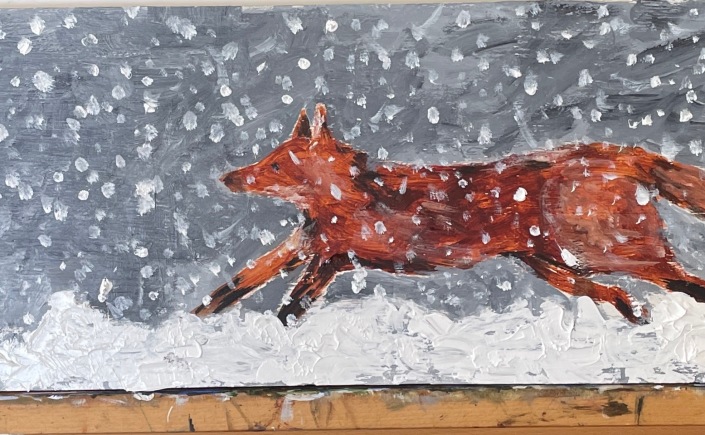 I haven’t painted since July when I got Covid. My imagination hasn’t worked in that way and the concentration needed for painting is different from “normal,” and I haven’t had it. Yesterday, struggling still with Covid’s lingering residue — which I’ve accepted could last a long time — I decided I could try at least ONE thing.

I have one of my garden signs hanging on the fence in my front yard. I don’t like the painting very much, and apparently no one else did, either, because it didn’t sell. It’s a salmon poppy against a blue sky. It should have been pretty, but somehow it really isn’t. I hung it on my fence during the spring and summer drought for a little color and to get it out of my studio. It’s a nice enough painting, so, no reason not to, right?

But poppy season has passed, holiday season is upon us in full force starting today, and I thought yesterday, “Well, I can do that.” I went out to my studio and took out a primed piece of plywood that was ready to become a garden sign. I had the thought of painting something seasonally acceptable, specifically, “Let it snow,” sort of like a prayer flag with my and Bear’s and every farmer’s prayer written on it.

Then the magic of painting kicked in.

I listen to music when I paint. I listen to YouTube, and sometimes they put a song I like in my list that I haven’t listened to in a while. The song in question was this:

Whoa… Two things happened. One was hearing a song I think is beautiful and has to do with snow. The other was the word “fox”in the band’s name. I’d already experimented on the sign with something I have long wanted to try. I’d painted the snow on the ground with my palette knife. That was fun. I knew it would be, but nothing I’ve painted so far lent itself to that experiment. I’m not sure a board is the best surface for that, but maybe. Painting with a knife uses a LOT of paint, but I have a lot of acrylic for which I gave thanks to my deceased friend, Alex Colville, more especially his wife, my friend Louise, who, last year gave me Alex’ paint. It’s a nice story. You can read it here.

I drew a fox across what was to be the letters. I had the idea the letters would remain, but as I began painting the fox — directly squeezing paint onto the board — I saw they wouldn’t. The whole thing changed.

I had such a good time. It’s not a masterpiece, and I’m not happy with the proportions of the fox, but I’m trying to ignore that and leave it alone.

So now my job is to varnish it and hang it on the front fence.

Happy Thanksgiving to everyone whether you’re in the US — where it’s a holiday today — or anywhere else in the world. One of my most beautiful Thanksgivings happened in the PRC in 1982. No turkey, but we had a chicken. No mashed potatoes, stuffing, or sweet potatoes, but we had potato salad. No biological family, but a home filled with Chinese friends and chosen “family.”

As for today’s prompt? I think the Aussies have the BEST slang.

This site uses Akismet to reduce spam. Learn how your comment data is processed.