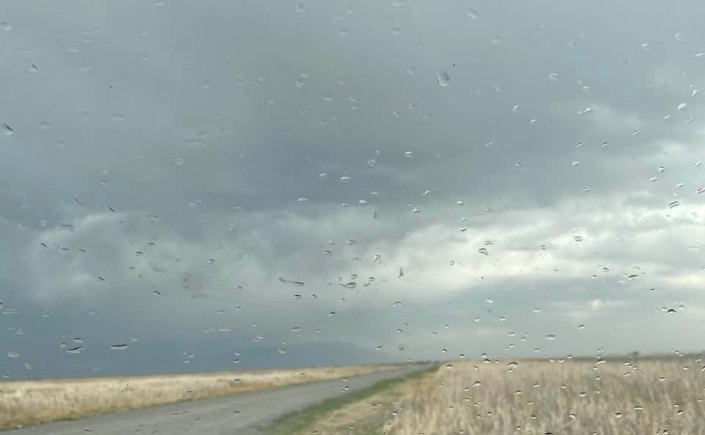 The ultimate clock face took a rest yesterday, and we had some actual clouds and maybe fifty or sixty rain drops! In the distance was a lightning storm that set fire to grass near The Great Sand Dunes, some 45 miles/72 km away from me. The fire is already out.

Bear’s superior hearing alerted her to the thunder and that led her and Teddy into the Room of The Bike to Nowhere where they hide in thunderstorms. They were a big help to me doing my balance exercises because Bear kept leaning against me creating a new challenge for which I was grateful.

When I finished my training for the Idiotride (my personal challenge), I saw the wonder and beauty of how the afternoon had shaped up. I smelled petrichor; I felt the cool breeze. Teddy was on to me, and ran out the back door and into the garage fearing I wasn’t going to take him. (But I was!) I leashed Bear and we headed out to the Refuge.

I knew it would be good and it was. I was able to identify a bird I’ve been seeing, an American Avocet. Very pretty small being somewhere in size between a blackbird and a duck, with long legs and a curved bill.

The clouds to the south reminded me of a painting by Georgia O’Keefe. Above the Clouds.

She said she was inspired to paint this (and at least one other) from looking down at clouds from an airplane. The clouds I saw yesterday would have given O’Keefe the same view if she’d been flying from Monte Vista to Ghost Ranch.

The good news is — obviously — that I have a bean. Tu Fu’s little leaves will unfold today. This has been a little lesson in optimism and faith which, together, are synonymous with “do it anyway.”

The featured photo is of some strange stuff that hit my windshield. I just don’t know…

Back in the late 70s I discovered Georgia O’Keefe, learned about her life, sought her paintings and admired her very much. I am no longer that young woman, but I think of Georgia O’Keefe as kind of a hero. She found her place and did her thing. Right now, at 66, I think that’s heroic.

So, when my friend came down with the Airdyne, my new exercise bike from the 1970s in nearly pristine condition WITH racing stripes, we decided to go to Georgia O’Keefe land which is 2 hours and 20 minutes away more or less. We stopped first in Abiquiu where O’Keefe lived — but her house and the painting exhibit that goes with it wasn’t open. We had a nice lunch and then headed further along to the Ghost Ranch, the setting of many of O’Keefe’s landscapes. 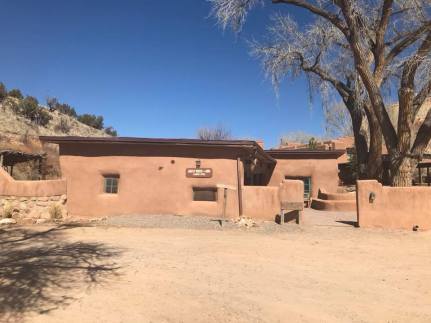 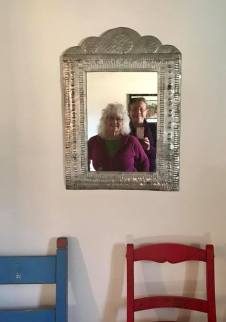 Us in the Mirror

Honestly, I found it a little odd. Ghost Ranch was originally a dude ranch and now it’s kind of a religious retreat marries tourist attraction, but it was beautiful with many well preserved adobe buildings from the turn of the 19th century.

We drove back to Monte Vista over Cumbres Pass — through some of the Southern San Juan Mountains. There was quite a bit of snow — not for this time of year (it should be much deeper) but it was lovely to drive on a clear and plowed mountain pass with no traffic and snow on the ground. The scenery was amazing. I don’t have photos because I was driving.

And…thanks to the cortisone shot, I walked 1.3 miles without a cane. I went up and down stairs. I kind of ran. I’m beginning to understand on a non-intellectual and more visceral level how repairing this thing is going to be great for me. 🙂 ❤