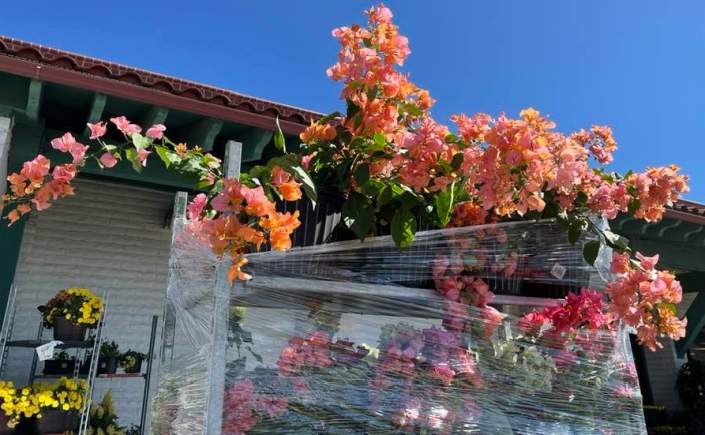 My life has — even in simple things — a tendency to be intense. I don’t know why, but it’s always been that way. This morning I went to City Market to pick up my groceries. As I drove into the area where I park, I noticed something in the outside garden area that shouldn’t be here.

Bougainvillea. Bougainvillea is Southern California and Italy, not this high desert place with the -30F temps in winter, cowboys, all of it that it is. Bougainvillea is San Diego, my garden in the hood, and beautiful, wild, immense and imported plant that gives a home to stray cats, rats, mice and sometime possums. It doesn’t belong in Alamosa, Colorado. My eyes filled with tears.

Sometimes I’m homesick for California. Ok, I admit it. You don’t live somewhere 30 years without parts of your heart and soul taking root. And, it was 8 years ago today (thanks FB memories) that the deal closed on a house I never wanted to leave in a place where I was happy. Add to that, I was leaving a profession I loved. It was ending piled on ending. I had 48 hours to get out. I put a good face on it, but inside I was very sad and very scared. All that made it bearable was necessity and the knowledge that it would be very beautiful where I would live — though I didn’t know where that would be. I knew it would be the San Luis Valley, nothing more.

At City Market I wasn’t sure it WAS bougainvillea. It seemed too strange. I got out of my car and went to see, blinking back tears.

Of course, I’d seen too much of that plant NOT to know it when I see it.

Destinee came out with my groceries. I was standing behind my car, looking over at the plant, thinking about adoption and deciding against it. I was wearing a t-shirt with a big snowflake on the front — kind of a wearable prayer flag. A lot of my shirts have snowflakes on them.

“What are you doing, you little snowflake?” she said. “It’s kind of early for that!” I didn’t remind her that 2 years ago it snowed on September 9.

“See that flower?” I pointed.

“It shouldn’t be here.” I told her what I already told you.

“I’m going to be working out here one or two days. What can you tell me?” I told her that the colorful part isn’t the flower, and that the plants needed lots of sun but not a lot of water. She then shared about problems she’d had with a manager inside. We agreed that it doesn’t make sense for Boss A to make it hard on Employee B just because Boss A “paid their dues” so the young person should have to pay theirs. The conversation (mine) went to Goethe when I noticed Destinee’s earrings said, “Virgo.”

“You were born in August? So was my favorite poet and writer. August 28. 18th century German guy.”

I explained about Faust, how it was an old, old story and the standard version had Faust damned for eternity, but Goethe’s didn’t. That for Goethe’s idea of God it was cool that a human was curious and determined, and after all Faust went through, God redeemed him and the devil lost the bet. Destinee was totally into it.

“I told you I’m going to back to school,” she said.

“Yep. I’ve been happy about that all week.”

“Well, when I do, will you help me with my English papers?” 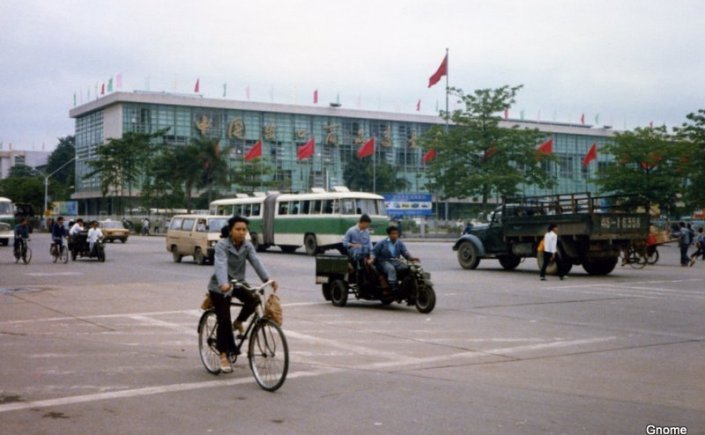 36 years ago I went to China. It wasn’t the place it is now. Today I’ve had the chance to wander down memory lane through my blog posts with a blogging pal who’s in China now with his family.

It makes me want to invest in a slide scanner so I can see the pictures we (mostly my ex) took while we were there. The things I want to see really are gone — some for real, some just as they were back then, such as junks on the Pearl River, favorite street corners, my apartment, the university where I taught.

Sometimes people ask me if I want to return to China for a visit, but it’s impossible. I wish sometimes there WERE worm-holes in the universe through which we could revisit places AND times. More than once this morning I was moved to tears through the sharing of memories.

AND the miracle of my blog, his blog. and the Internet. Imagine exchanging knowledge of places in China with a man from India (that one has not met) in real time — seriously. That’s unreal and wonderful.

This song by Vasco Rossi is right on.

Translation (with the repeated bits left out) I just saw this trailer for a film coming out this fall, and I want to see it.

I learned to ski on the “back” side of Pikes Peak. When I left Colorado in the mid-eighties, there were copious ski areas. The morning ski report was long. When I look at a ski area map now, it’s not like that. It shows the “mega” resorts that remain.

These ski areas weren’t resorts at all, many of them. They were places you could go in a day. Pikes Peak Ski Area was right off the Pikes Peak Highway — easy access. It was small, some rope tows, a poma and a chair lift. The snow was usually pretty good because it was on the north side of Pikes Peak — it was high, shaded and fairly well sheltered from the wind. These ski areas often didn’t have many runs or amenities — no fancy hotel to spend the night, no shopping, food was often burgers cooked on the mountain on oil-drum grills and eaten standing up, but with season passes that cost $25 for a family, they made the sport accessible. The focus was on skiing.

Back then, too, there was a little reverse snobbery. Real Coloradans didn’t wear fancy ski clothes because skiing was part of who they were, an every day thing, nothing to get dressed up for. Fancy ski clothes revealed that the skier was from Chicago — or worse — Texas. For a while it was popular to ski in bibbed overalls. I didn’t; but I did ski in jeans. When I started X-country skiing, I wore those clothes to the down hill ski areas because there was political contention over “skinny skiers” using downhill slopes. I had to make my point, right? 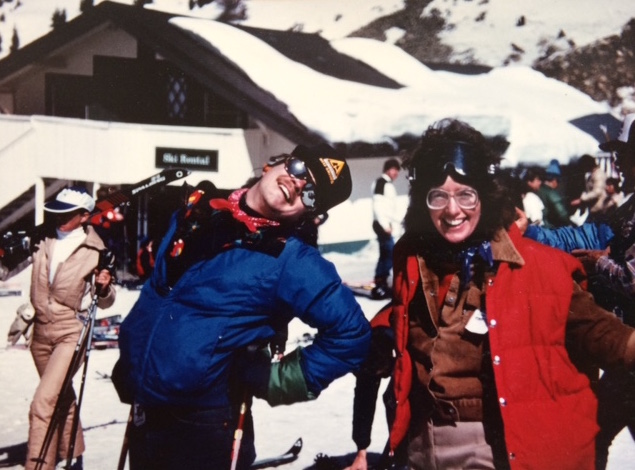 A friend and I at Arapaho Basin, 1982. I’m wearing knickers, high wool socks and layers.

Some of the small ski areas have grown up — Arapaho Basin back in the day was smallish and funky, but now it’s expanded and appears to be more closly linked to its neighbor, Keystone. I can’t say for sure; I haven’t been back.

Right now the local ski area — Wolf Creek — is the center of a big fight between conservationists and a rich Texan who wants to develop it into a resort. A ski resort would pretty much destroy the vibe that Wolf Creek wants to maintain and that the people here are comitted to. It’s a tense and murky situation since the economy of Southern Colorado is depressed and a ski resort would help, but, at the same time, it would put “our” ski area out of the reach of most people who actually live here.

I like the idea of small, local ski mountains, but economically, I can see they stopped being viable. Climate change has made the snowfall less dependable than it was when I was a young woman. Maybe there’s no connection between thousands more people driving into the mountains every weekend from Denver to Vail, Aspen, etc. than there were thirty years ago and the fact that we have less snow. No idea.